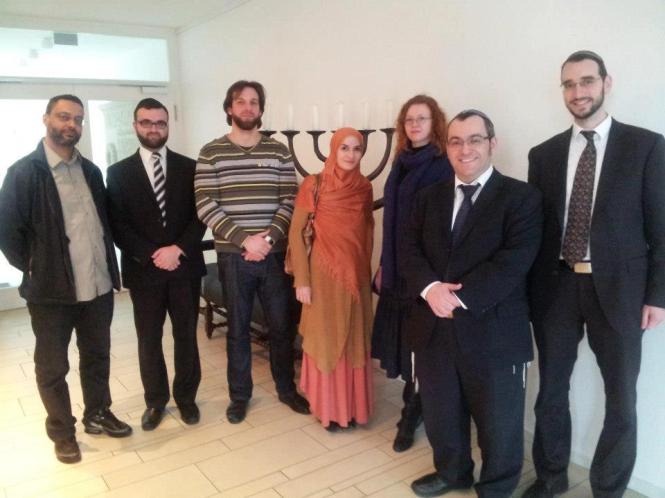 Three prominent German rabbis met with leaders of the German Muslim community at a twinning event held at the synagogue in the western German city of Osnabruck. Among those participating in the event were Rabbi Avichai Apel of Dortmund, chairman of the German Orthodox Rabbis Association; Rabbi Yaron Englemayer of Cologne and Rabbi Moshe Baumel of Osnabruck. Representatives of the Muslim community included Moussa Al-Hassan Diaw, M.A., who heads the German-government supported program for the training of imams at the University of Osnabruck; El-Hadi Khelladi, head of the Muslim-Jewish Conference-Germany and Ayse Cindilkaya, a leader of RAMSA, the German Muslim Students Association.

The main organizers of the event, Al-Hassan Diaw and Rabbi Apel, agreed that the Twinning event was an important step forward in expanding Muslim-Jewish communication and cooperation in Germany. Explaining that the participants discussed a wide variety of topics, including similarities in the Torah and Quran and how the two communities can work fruitfully together in Germany on issues of common interest, Al-Hassan Diaw remarked, “This meeting was of critical importance in creating a sustainable dialogue, as we work to build a bridge between our two communities; something that does not exist now but is urgently needed.”

According to Rabbi Apel, “Our goal is to make interactions between Jews and Muslims the norm here in Germany. We see that there are many things which unite us, like the battle over our right to circumcision. We recognized that our values and outlook are more in common than the world realizes, so we need to push those commonalities rather than focus on the differences.”