Italian, French and U.S. Muslim and Jewish leaders held festive public events in Florence and Siena on November 26 and 27 under the patronage of the Regional Council of Tuscany vowing to build ties of communication, reconciliation and cooperation between their communities and pledging to be there for each other if either community is victimized by hate crimes or incitement. Specifically, participants in the events vowed to work together against a resolution passed last month by the Council of Europe urging the banning of male circumcision.

The Muslim-Jewish events in Tuscany were held in conjunction with the 6th Annual International Weekend of Twinning, a global event sponsored by the New York-based Foundation for Ethnic Understanding (FFEU) bringing together Muslims and Jews for joint events in cities around the world. This year, there were more than more than 130 twinning events involving thousands of Muslims and Jews in more than 30 countries on all six inhabited continents.

Participants in the twinning event in Florence on November 26, held at the ornate Renaissance era Palazzo Bastogi under the patronage of Alberto Monaci, President of the Regional Council of Tuscany, included the Chief Rabbi of Florence Joseph Levi, the Imam of Florence Imam Elzir Izzeddin, Sarah Cividalli, President of the Jewish Community of Florence, Scheherazade Zeraoula, vice president of the Amitie Judeo-Musulmane de France, Sarah Craddock Morrison, U.S. Consul-General in Florence and Walter Ruby and Samia Hathroubi, respectively Muslim-Jewish Program Director and European Cordinator of FFEU. The following day the international Jewish and Muslim leaders visited a recently inaugurated mosque in nearby Colle Val D’Elsa and were received by Alberto Saccone, the Chief Administor of the Regional Council of Siena, who pledged the full support of his Council to efforts strengthening interfaith relations and upholding full civil rights for adherents of all faiths.

Rabbi Levi and Imam Izzeddin have built a close friendship and working relationship based on the fact that one is an Israeli born in Jerusalem and the other a Palestinian born in Hebron. Speaking at the event in Florence, Rabbi Levi commented, “Through the centuries Jews and Muslims have felt a sense of kinship because of our common deep commitment to monotheism and to service to God and to the societies in which we live side by side. Today, in Florence and around the world, we are committed to reaffirming those commonalities and forging a future relationship that will be better and stronger than the reality of today.”

According to Imam Izzeddin; “I am blessed to have a partner for Muslim-Jewish dialogue in Rabbi Levi who is a dear friend with whom I can speak freely and openly on every subject. In strengthening relations between our two communities, we Muslims and Jews do not seek to erase differences, but rather to work together step by step to gain a richer understanding of the Other.”

In his remarks, Walter Ruby praised the work of Rabbi Levi and Imam Izzeddin, stating, “What a wonderful and precious reality that here in Florence, the heartland of the Renaissance, we have a rabbi born and raised in Jerusalem/Al Quds and an imam born and raised in Hebron/ Al Khalil, who have established a strong friendship and work so well together. What a great symbol of hope they represents to Muslims and Jews around the world.” Ruby added, “The Foundation for Ethnic Understanding (FFEU) is proud to support the building of Muslim-Jewish friendship and trust in Italy and around the world. Our communities are not fated to remain in perpetual conflict with each other. Working together we can create a new and better reality.”

Samia Hathroubi urged Muslims, Jews and all people of conscience to sign a petition launched by FFEU to urge the Council of Europe to rescind its resolution calling for the banning of circumcision, (http://www.change.org/fr/p%C3%A9titions/a-muslim-jewish-call-to-council-of-europe-rescind-your-resolution-advocating-the-banning-of-circumcision-support-religious-freedom-for-all-europeans), stating; “It is critically important to take a strong stand against a resolution which, if actually passed by various nation states of Europe, would make Muslim and Jewish life impossible in those countries. Our communities must stand together against all manifestations of Islamophobia, anti-Semitism and xenophobia and in defense of pluralism and religious liberty across Europe.”

While receiving the international visitors in the ornate Pallazzo de Governo in Siena, formerly the seat of power of the Medicis, Chief Administator Saccone of the Region of Siena, commented, “The Regional Council of Siena pledges to offer a space for projects to strengthen dialogue and understanding among faiths. We are committed to upholding the principles in the Italian Constitution guaranteeing full civil rights and religious liberty for adherents of all religions.” 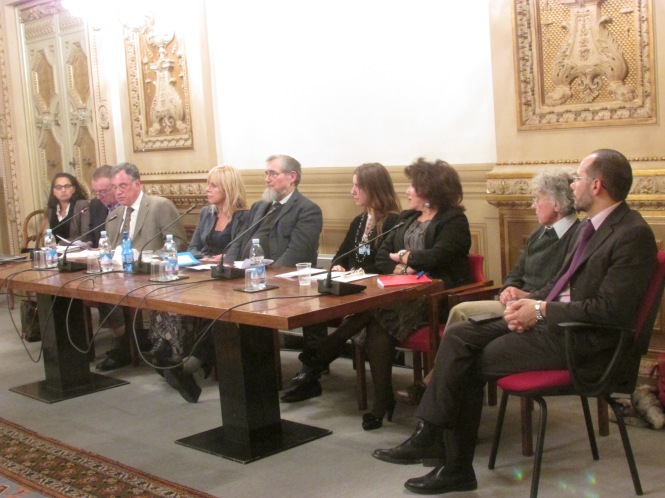 Speakers at Muslim-Jewish twinning event at Palazzo Bastogi in Florence