In the wake of the horrendous shootings in nearby San Bernadino, and amidst global terrorism and backlash against innocent Muslim-Americans, over 300 Los Angeles area Jews and Muslims came together to declare ’We Refuse to Be Enemies’ in a program featuring joint Muslim-Jewish prayer and a celebration of traditional Muslim and Jewish musical motifs. The event took place on Sunday afternoon December 6 at the I.M.A.N. Cultural Center, the city’s premiere Iranian Muslim community center.

The event, sponsored by the SoCal Muslim-Jewish Forum (SCMJF), an organization affiliated with the Foundation for Ethnic Understanding which works to strengthen Muslim-Jewish relations across Greater Los Angeles; was a spiritually uplifting occasion, featuring a joint observance of Muslim and Jewish afternoon prayers, led by “Two Faiths, One Prayer; a change-maker project from NewGround: A Muslim-Jewish Partnership for Change. Offering a melodic and at times ecstatic backdrop to the event was a heartfelt musical performance featuring SCMJF member Rabbi Neil Comess-Daniels jamming with Muslim musicians Ahmed Pierstroff, Bassem Rashidi and Moose Simjee. Many of the participants in the event banged on drums and shook tamborines provided by the musicians and snake-danced together around the auditorium. 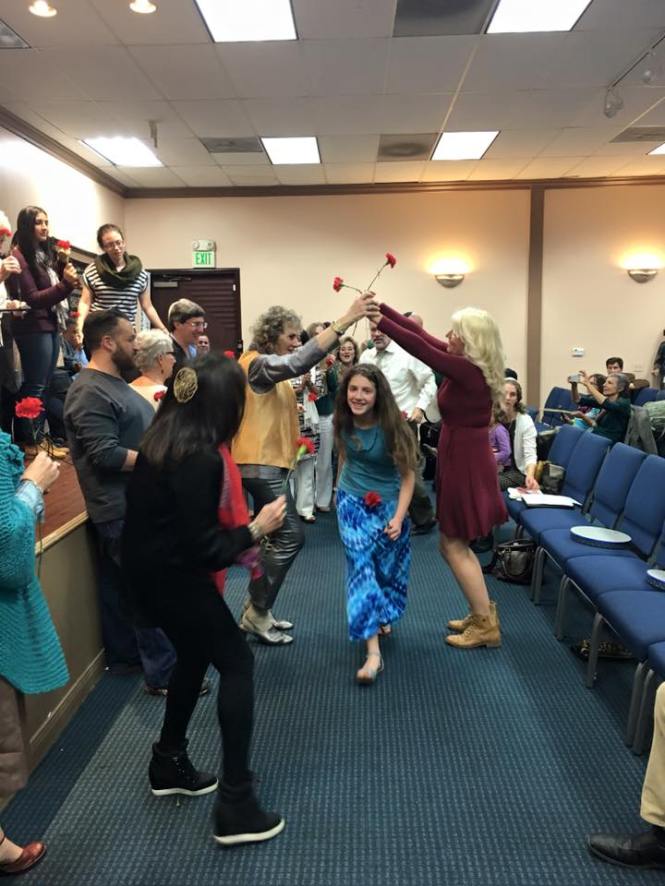 Music and Dance bridging communities together!

The carnage in San Bernadino, only 60 miles east of LA, hung heavy over the event; suffusing the proceedings with a sense of sadness and forboding; even while seeming to infuse greater urgency into the desire of all the participants to connect with each other and celebrate together as Muslims, Jews and human beings.

Before launching into a passionate rendition of his amalgam of Od Yavo Shalom Aleinu with the word ‘Salaam’ prominently inserted, and the Bob Marley anthem One Love, One Heart, Comess-Daniels reminded the audience, ““There is anger in every tradition. This week, we had an event that for Muslims and Jews who work together, hurt particularly, one that threatens to take us miles backward. … Today is a day we must say to each other, ‘Your children are my children; my children are your children.” 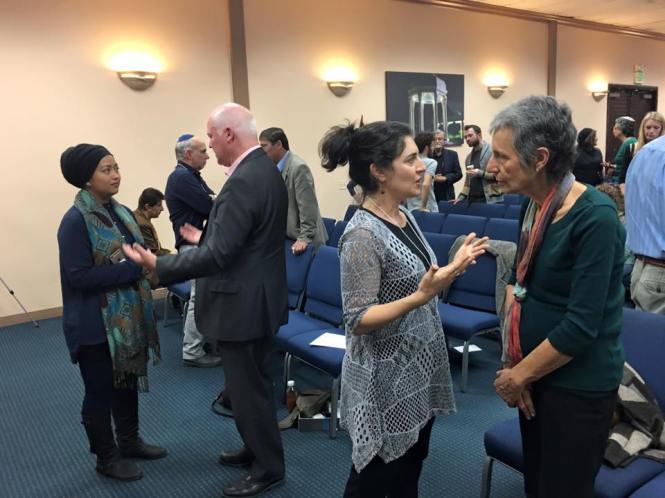 Addressing the crowd, before Jewish and Muslim worshippers began their respective prayers side by side, Andrea Hodos of Two Faiths One Prayer commented, “Its very dark out there and in such situations, people tend to close off and to pull within their own camp. What we are saying today is, ‘No, God wants us to find a way to be Together.” Soraya Ahyaudin, Hodos’ Muslim co-leader in Two Faiths One Prayer, cited the Quranic verse noting that if God had wanted people to be of only one type, he could have created them that way, but instead “created different tribes.” According to Ahyaudin, “The diversity is how God created us. So this is how I get close to God, by embracing the Other.”

FFEU Muslim-Jewish Program Director Walter Ruby told the audience, “Amidst the pain and sorrow of recent events, let us joyfully embrace each other and celebrate today. Let us groove out together in enjoyment of the gorgeous Muslim and Jewish music we will be hearing and to join our voices in prayer.” Noor-Malika Chishti, the chief organizer of the event for the SoCal Muslim-Jewish Forum said, “This was a powerful and timely response to the violence in San Bernadino, Paris, Beirut and too many other places, and gives us the strength and inspiration we need to push forward and deepen our ties; spurning the efforts to pull us apart and reaffirming that we refuse to be enemies.”

Dr. Sadegh Namazikhah, President of the Iman Center said the event, “brought tears to my eyes” and expressed the hope “that this will lead to many more Muslim-Jewish events involving members of both the Iranian Muslim and Jewish communities.”